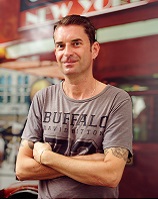 História v Empire: I have worked at Empire since october 2018, as an English lector.

Niečo o mne: I am very tall, probably tallest guy at Empire, 6ft5. I must admit I love teaching, and communicating with students. Sense of humour is essential to me, and I like to teach and have fun at the same time. After spending 17 years in England, I have decided to pass my English language experience and knowledge to my students at Empire. And I really enjoy it. I often miss England, I can‘t do without my cup of tea, love football/ massive Tottenham Hotspur fan/, like watching English TV on everyday basis. I would say I am very much influenced by the English culture, I had to assimilate really. I like playing the guitar too, and I used to play in the rock bands.